You may have noticed our blog has been dormant for a year now; Jaime's progress however, has most certainly not!

Jaime's second year of life has been no less eventful than her first. J has now had her CI for 15months, it has melded to become part of her, part of who she is. J wakes up in the morning bright, bubbly and ready to play, amongst her morning routine there is always a request for her 'ears', she takes such joy in the sounds around her. Sitting in her room her ears prick; What's that? Who can she hear? "DADDY!!!"... J races down the hall to the next room and leaps into bed to give daddy good morning cuddles, I can't help but smile, this is my little deaf girl, the girl that started in a Quiet World.

In August our cheeky J became a big sister, the most loving and doting sister you could wish for. This has however, called for a large adjustment and has heard the introduction of every two year olds favourite word.... 'NO'.... "No, No, No, No, NO!" (especially at bedtime), luckily most of the time she is a charmer ready to try and make you smile.
Shortly after our baby boy arrived Quiet world mumma and daddy waited with baited breath, the familiar little cups were unpacked and ever so gently placed over two tiny ears, baby B lay peacefully unaware... as carriers for the Cx26 gene, baby B had a 25% chance of being deaf like his big sister. I was undecided, I was torn, on one hand I wanted J to have a sibling that would share her journey, a special bond, on the other hand what parent would wish an extra challenge on their child. With his newborn hearing screen complete we had our answer, baby B had passed. I have to admit, I actually felt a little strange talking to my new baby knowing he could hear me, my normal had been a deaf child not a hearing one.

September arrived and it was time for our one year CI review. At 23months old Jaime had now been implanted for 13months, she trotted in, the usual smile spread across her face. Over the course of two communication and language development scales her speech, vocabulary, understanding and social interaction were assessed... of course as your typical toddler she didn't perform all of her abilities on cue (frustratingly so, because anecdotal evidence from parents was not allowed to be used for this assessment) however two weeks later her review results were in...
Chronological age: 1year 11months
Hearing age: 1year 1month
Speech and Language scores: 1year 11months and 2years 1month!!!!
Not only had she shown speech and language skills appropriate for her age, she had even managed to nudge ahead.
As any parent of a hearing impaired child knows, half the battle is to catch up to their hearing peers... We are so thrilled Jaime has made it, our hard work is paying off. The work isn't over of course, Jaime will still need regular speech therapy and her learning and listening environment will always have to be monitored to ensure she continues to keep up with her peers. 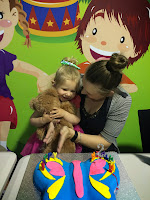 To top of the trio of celebrations we celebrated J's second birthday at a large play centre, a big hall, kids everywhere, air cannons in the ball pit and a compressor running the jumping castle... a nightmare of sounds, yet Jaime loves it, she races around the tunnels and climbing frames, even without her FM system she responds well and comes racing back when birthday cake is announced ;)
*the biggest achievement of course is to make it out of there with both her CI and HA still on her head! 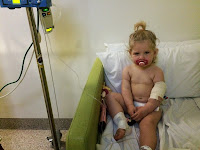 Unfortunately our high spirits weren't to last long. not much more than a week later I woke to every CI parents nightmare, Jaime, who had been battling a cold for a couple of weeks woke grumpy and lethargic, I took her temperature... 40C! Oh my, well we certainly weren't going to daycare today... then I tried to place Jaime's coil, she yelped and refused to let me put on her processor, this was certainly unusual behaviour for my little girl who loves to hear. I swept back her hair and there behind her ear was a large swelling, hot and red.... My heart leapt... what do I do! The phone calls began and soon I was packing my precious little girl and baby boy into the car and heading in to our local hospital. Once there J was immediately started on intravenous antibiotics, her ENT was contacted and the decision was made to transfer her to the Royal Childrens Hospital (RCH). At this stage I was still unsure what was going on, I knew J had ended up with an ear infection (her first.. she doesn't do things in halves!) and I knew she required some more IV antibiotics, what I didn't know was what was in store for my Jaime.
By early evening the ENT team at the RCH had seen to Jaime and the decision was made to call her ENT surgeon in for emergency grommets to drain the infection from her ear. Just after midnight Jaime was heading into theatre (something I didn't think I would have to contend with again) I barely had time to think about what was happening as I found myself again cradling my baby girl to sleep under the watchful eye of the anaesthetist.
My husband and I sat in the empty hall (with baby B who had patiently been dragged along for the ride), an hour later Jaime was out of surgery and awaiting us in recovery, her ENT only now filled us in as to the severity of her infection... the grommets were draining well, however the next few days would tell if she would loose her implant or not... I knew this was a risk, however so far no one had let on that this was a real possibility. Jaime's ENT would see us in two days time to see if further surgery was needed, in the meantime J was to be admitted to the hospital for intensive IV antibiotics.

Two days later and thankfully J's infection was beginning to succumb to the antibiotics (I would really hope so as she was on a duo of antibiotics every two hours!), she wouldn't require further surgery for now, wow what a weight lifted!

Over the next seven days we got to know the RCH well, we made daily visits to see the meerkats and the aquarium and stopped off for an obligatory play at the fa-fly (Butterfly) that adorns the statue in the main foyer of the hospital. No-one wants to endure a hospital stay, even less when its for your child, however I began to enjoy our time at the RCH, there is something warm and inviting about their bright sunlit wards and the halls and foyer are grand and somehow uplifting. The playgrounds are filled with children attached to drips, bandaged or in wheelchairs but all with a smile on their face! Surrounded by so much ailment somehow this hospital achieves an air of positivity and peace.


Our final day arrived, once again Jaime was to head into surgery, this time to place a central line (a drip directly into the large vessels in her chest), we were heading home finally, but Jaime had to continue with daily IV antibiotics.

For us this meant daily visits to our local hospital, although much smaller that the RCH, the staff made us feel welcome (it helped that Jaime walked in everyday with a big cheery 'elo!! and her signature grin). Jaime impressed me over the next 3weeks, as we arrived on the paediatric ward she would strut down to the procedure room, jump on the bed (request the usual bubbles of course) and then proceed to instruct the nursed on how to take her vitals! She would make a brilliant little nurse one day!

Finally we catch up to today... Jaime has been off her IV antibiotics for a few days and we have begun her long course of oral antibiotics (3months worth!) she is bright and happy with all signs of infection at bay. Her CI is functioning well and her speech is continuing to flourish.

What about her Hearing Aid I hear you ask? Now thats a whole new kettle 'o fish...


Having been away from my blog for such long time don't forget to post your comments or questions below...


**In light of our recent hospital stay I wish to encourage you all to not only support our major children's hospitals such as the RCH, but also consider popping in to your local paediatric ward and seeing what you can do to help. These wards in our local hospitals tend to get forgotten, we all see the big fundraisers like the Good Friday Appeal, and those funds are certainly put to good use, however it was eye opening to see our local paediatric ward holding a raffle simply to afford a wheelchair.

Posted by Jaimes Quiet World at 09:00

Questions about our journey with sensorineural hearing loss? Or do you have a story of your own to share? 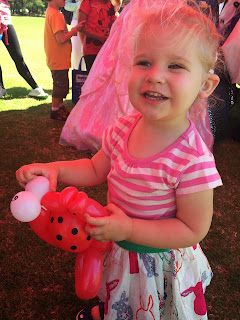 Jaimes Quiet World
First and foremost, I am a mum. My daughter Jaime was diagnosed as deaf from birth. Join me as we explore Jaime's Quiet World, a world of hearing aids, sign language and cochlea implants. Our journey through the how and why. Our journey through the world of sensorineural hearing loss. My aim is to support and inspire other parents of deaf children so they may walk through their own quiet worlds with confidence.